“It was increasingly apparent that the way in which I listened to her story changed the story itself, and I reaffirmed my intention to present a neutral front, giving little away.” 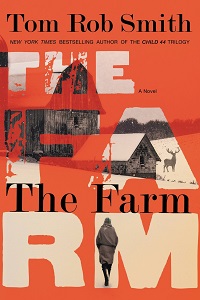 “If you refuse to believe me, I will no longer consider you my son.”

Daniel believed that his parents were enjoying a peaceful retirement on a remote farm in Sweden. But with a single phone call, everything changes.

“Your mother… she’s not well,” his father tells him. “She’s been imagining things – terrible, terrible things.” She’s had a psychotic breakdown, and been committed to a mental hospital.

Before Daniel can board a plane to Sweden, his mother calls: “Everything that man has told you is a lie. I’m not mad… I need the police… Meet me at Heathrow.”

Caught between his parents, and unsure of who to believe or trust, Daniel becomes his mother’s unwilling judge and jury as she tells him an urgent tale of secrets, of lies, of a crime and a conspiracy that implicates his own father.

*** I requested this review copy through NetGalley. ***

Tom Rob Smith has been on my radar for a while. I never got around to reading his debut, which eventually turned into a trilogy. But I think a stand-alone is a better way to test out a new author anyway, so when I saw he had a new, unrelated book coming out, I was intrigued.

The Farm is slow-building but extremely compelling. The story itself is a page-turner, but on top of that, it’s the way the story is structured that makes it so hard to stop reading. Each chapter leads seamlessly into the next, and when I absolutely had to take a break, I actually had more success pausing at random points within a chapter… something I rarely do.

I quite enjoyed Smith’s writing. I’ll admit, at times it was hard to believe this is an ordinary person telling a story. It just reads so much like a novel that there’s no mistaking it for anything else, and that did make it hard to completely lose myself. But that’s a minor quibble. So few books can actually make me forget I’m reading a book, it hardly seems fair to judge poorly the ones that don’t.

All the way through, I truly didn’t know how it was going to end. I had wildly conflicting theories, any of which I could see as plausible endings, but no confidence about which way it would go.

The Farm was refreshingly different – part conspiracy, part family drama, part psychological thriller. And now that I’ve had a sampling of Tom Rob Smith, I’m eager to read more from him.

The Farm is available in print, as well as for Kindle, Nook, and other e-readers.

Does The Farm sound like something you’d pick up? What was the last book you couldn’t put down?