Adventures in the City of Literature

This weekend, I went on an adventure.

Ever since moving to Iowa and getting caught up in the online book world, I kept hearing things about Iowa City. In particular, Prairie Lights is said to be a great indie bookstore (I even included it in my Bookish Bucket List a while back), but the city itself is supposed to be a great place for bookish folks. It’s actually been granted the title City of Literature – the only one in the U.S. – by the United Nations Education, Scientific, and Cultural Organization (UNESCO).

So I’d been thinking for a while that I should really take a day trip and go check out some of what Iowa City has to offer.

And when I included Prairie Lights on that list, Tif (who I’d forgotten lived in the area) responded: “If you make it over before I move, let me know. Maybe we can meet for coffee?!?” 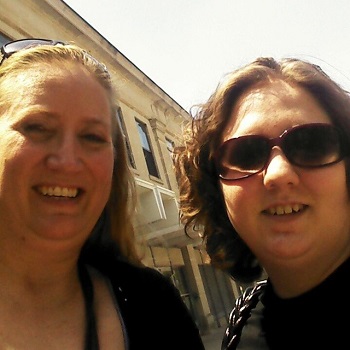 Tif on the left; me on the right
(courtesy of tiftalksbooks)

As I mentioned last week, I was super nervous about meeting someone that I knew from online and completely ruining her opinion of me… but it was a lot easier than I expected it to be. It didn’t at all feel like we were meeting for the first time, except maybe at the beginning and at the end, where my awkwardness at real human interaction shone through.

After Tif left, I wandered around the city on my own (or at least a tiny portion of it), and I enjoyed it so much. They have a pedestrian plaza… 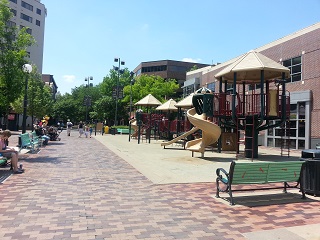 …where I found this! 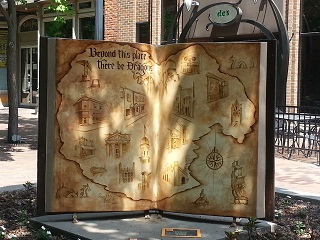 There’s also a “literary walk” with plaques set into the pavement. (I didn’t get any pictures of these, mostly because my shadow was doing stupid things.)

So the city itself just has this great atmosphere. The University of Iowa is right there, so it has that academic feel as well. And when I stopped for lunch, I got a garden pita just like the ones I used to get at NIU back in the day. So, this day really made me miss my college days.

Of course, I didn’t just wander around aimlessly. As I said, my first planned stop was Prairie Lights. 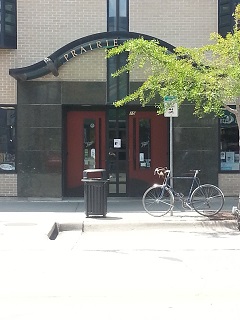 To be honest, when I walked in, it didn’t really feel all that special. It’s big for an indie; I guess that alone is notable. And I loved that they have a café. But I guess from all the praise I’d heard for this store in particular, it just didn’t have quite as much character as I’d expected.

The Haunted Bookshop, on the other hand, was all character. 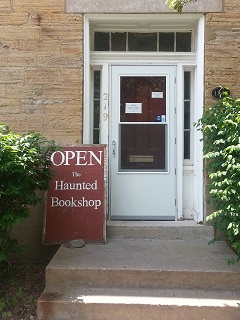 This one is a used bookstore, it’s set up in what clearly used to be a house, and walking into the shelves is like walking into a maze… but an organized one. This had a lot more of that indie feel that I was expecting.

I also (of course) visited the public library. 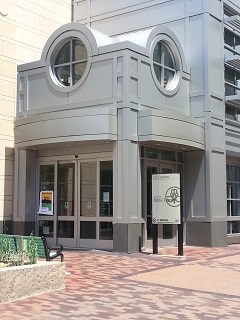 Now, I’ve made no secret of the fact that I love my library, but this one was impressive in a completely different way. It’s so sleek and modern. I don’t know because I didn’t use any of their services, but it gave the impression of being very efficient. And I also loved that there were study rooms and carrels (I told you this trip was getting me nostalgic). I do wonder, with the university practically across the street, how many students come through here, or if they pretty much stick to their own library.

I did peek into Iowa Book, which turned out to be the university bookstore, and Daydreams Comics, mainly because I’m not sure I’ve ever been in a comic book store (though I walked past St. Mark’s Comics when I was in New York).

I had a couple other places on my list to potentially visit – the Old Capital Museum, the Museum of Natural History, some of the city parks – but I decided I was tired, and left it at being a purely literary excursion.

I’m thinking about going for the Iowa City Book Festival in the fall (slightly more accessible than BEA, and not nearly as commercial). But, whether for that event or not, I would definitely like to go back.

What are some of your favorite literary destinations?

26 comments on “Adventures in the City of Literature”