“The toxicologists are working on an antidote, but without a better understanding… finding the Loch Ness monster and getting a sample of it might be his only chance.”

This is the fourth book in a series. This review contains no spoilers for previous books, aside from giving away the survival of the main character. 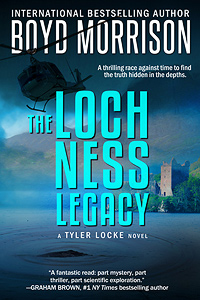 During a trek to Loch Ness, Scotland, a young Charles Darwin encounters a mysterious and terrifying creature that provides a spark for his evolutionary theory.

Almost two hundred years later and across the Channel in Paris, the Eiffel Tower is under attack. Only through detective work, intuition, and a judicious application of high-tech weaponry does former Army combat engineer Tyler Locke prevent a massacre.

What Tyler doesn’t know is that the assault is just the beginning of a conspiracy so dark that it not only threatens the lives of those he loves, but could also ignite World War III. Racing against time to uncover Darwin’s centuries-old secret, he must solve a series of cryptic clues to find a manuscript that has been so cleverly hidden it hasn’t been seen since the Victorian age.

Tyler’s quest takes him from the bustling tourist hotspots of Seattle to the splendor of Versailles to the remote Highlands of Scotland in a battle to reveal the shocking truth behind the legend of the Loch Ness monster.

What it is is a standard action thriller. Fast-paced, mostly entertaining, a little ridiculous at times… the kind of thing I’m used to seeing when I pick up a new author. Depending on how much I enjoy the characters or the premise, I may seek out their books in the future. I may not. But I never really expect amazing things from them.

Boyd Morrison was one of these authors for me… until I read the third Tyler Locke book, The Roswell Conspiracy. I reviewed this one earlier in the year (you can read it here). Something about this book just made it stand out from the others… all the more impressive considering that Morrison self-published this one after his publisher dropped him. With that book being my favorite in the series yet, I had high hopes for this one. Too high, apparently.

The Loch Ness Legacy isn’t as good as The Roswell Conspiracy. And while it’s a completely different style of thriller and thus not really a fair comparison, I also didn’t like it as much as Steve Alten’s The Loch, another book focusing on the mystery of Nessie. This one wasn’t bad… overall I did like it, but it wasn’t anything special.

What was good about it? The stakes are extremely personal. Not only are the main characters fighting to save the world, but there’s another layer that hits much closer to home.

The action actually fits the story, something I mentioned in my previous review. In the earlier books in the series, some of the action scenes felt out of place, whereas in The Roswell Conspiracy everything fit together much better. The Loch Ness Legacy, for the most part, continues building on that strength.

Also, the climax on Loch Ness itself… the last fifty or so pages are, to me, the strongest part of the book.

What’s not so good about it isn’t nearly as clear cut. Just a vague feeling that it’s not as good as it could have been… or at least, not as good as I’d hoped for.

Does this sound like something you’d pick up? How do you take it when a familiar author’s latest isn’t quite what you’d hoped for?