“The winters are fantastically cruel…” 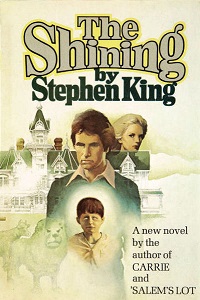 Jack Torrance’s new job at the Overlook Hotel is the perfect chance for a fresh start. As the off-season caretaker at the atmospheric old hotel, he’ll have plenty of time to spend reconnecting with his family and working on his writing. But as the harsh winter weather sets in, the idyllic location feels ever more remote… and more sinister. And the only one to notice the strange and terrible forces gathering around the Overlook is Danny Torrance, a uniquely gifted five-year-old.

I’ve been discussing The Shining for weeks now, but for those who may have been avoiding the discussion posts because you haven’t read it, I thought a proper review was in order (if you can call anything I write here a “proper review”).

I first read this about a year ago, so it was a bit soon for a re-read, but with Doctor Sleep coming out I wanted to refresh my memory, and I’m glad I did. The movie is so much a part of pop culture that, even having read the book way more recently than I’d seen the movie, they were jumbled up in my head.

One of my favorite things about reading Stephen King is the way he creates his characters, and The Shining contains some of his best (of the extremely small sample of his works that I’ve actually read). Jack and Wendy are incredibly flawed, but that’s what makes them so real. And then there’s Danny, who at times seems like a child much older than five (not so much a weakness in the writing as a reflection of his circumstances) but at other times breaks my heart with how young he is.

What really strikes me about this novel, though, is what a slow burner it is. I’ve read reviews from readers who were disappointed because they went in expecting this terrifying tale… and instead we get this story about a guy who’s going through some rough times, and his family is struggling, but he manages to get this winter job, and they make the drive in an old Volkswagon Beetle that’s about ready to fall apart, and the kid can sort of read minds, that’s kind of weird…

It goes on and on (and on and on) like that for a while. A lot of character building, quite a bit of foreshadowing, and a few scenes here and there that are moderately suspenseful… but no real scare.

To give this book a fair chance, you need to go into it knowing that it has a slow build-up with an explosive pay-off at the end, rather than a bam-bam-bam succession of scary scenes. If that’s the kind of story you can get on board with, The Shining is one you’ll probably enjoy.

(Unless alcoholism and domestic violence make you triggery… in which case maybe give it a pass.)

Normally this is where I ask if the book sounds like something you’d pick up… but you’re all familiar with The Shining, even if you haven’t read it. So I guess the question here is, have you read it? If so, what are your thoughts? If not, is it a matter of haven’t-gotten-to-it-yet, or is it just not your thing?

27 comments on “Review: The Shining”